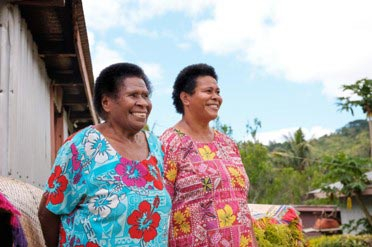 Artisan Organization: Rise Beyond the Reef

Rise Beyond the Reef Rise Beyond the Reef is a nonprofit organization based in Fiji that supports the endangered artisanry of twenty-five remote villages across of the country through strengthening Indigenous women’s craft production, leadership skills, and access to formal markets. It was co-founded by Janet and Semi Lotawa in 2013.

"It is often said that women are the vessels of culture, and in the case of Fijian villages, this couldn’t be truer," Janet Lotawa says.

"The women we support live with their families in remote village settings, but both climate change and urban drift have deeply affected the landscape and composition of these communities over the past few decades. Government ministries are sometimes too geographically distant to track the needs of rural settlements. This affects the communities’ infrastructure development, education levels, and connection to the rest of the country—and the world.

"With many of these villages experiencing a ‘cut-off’ from essential resources and services, we have asked ourselves: what Indigenous knowledge are we not tapping into to help address the current challenges we are facing? The answer was simple: artisanry.

"Sadly, traditional knowledge is no longer seen as a tool to tackle environmental and population changes, among other challenges. But with our Traditional Contemporary Arts and Crafts Program, this view is slowly changing. By placing women and craftwork at the center of changemaking, our project is concurrently bolstering the villages’ gender equality, Indigenous knowledge and culture, income generation, access to markets, biodiversity, and natural resource conservation.

"Through the medium of craft, we are constantly working to strengthen women’s leadership roles. Oftentimes, women artisans who have recently married into communities have the highest level of craftmanship but equally have the lowest social rank in the village. To bridge this gap, women organize in what are called Tribal Women’s Councils, in which they teach their craft to other members as well as learn about best business practices, i.e., how to formalize ordering and quality control processes.

"Women-led craftwork has contributed to some important conservation efforts. Kuta pond grass, which is used to make kuta grass mats and other ceremonial attire, comes from the wetlands of the Macuata island. This area has been increasingly threatened by unsustainable farming practices, including overgrazing and uncontrolled burning. With a higher demand for kuta pond grass, women in two Macuata villages have petitioned community leaders for a more serious approach to natural resource conservation."

"We have now become a fully fledged craft business, with a great variety of products coming from all twenty-five villages across Fiji. Each community brings its own artistic style and cultural heritage, making our collection a truly unique assortment of Fijian arts and crafts.""