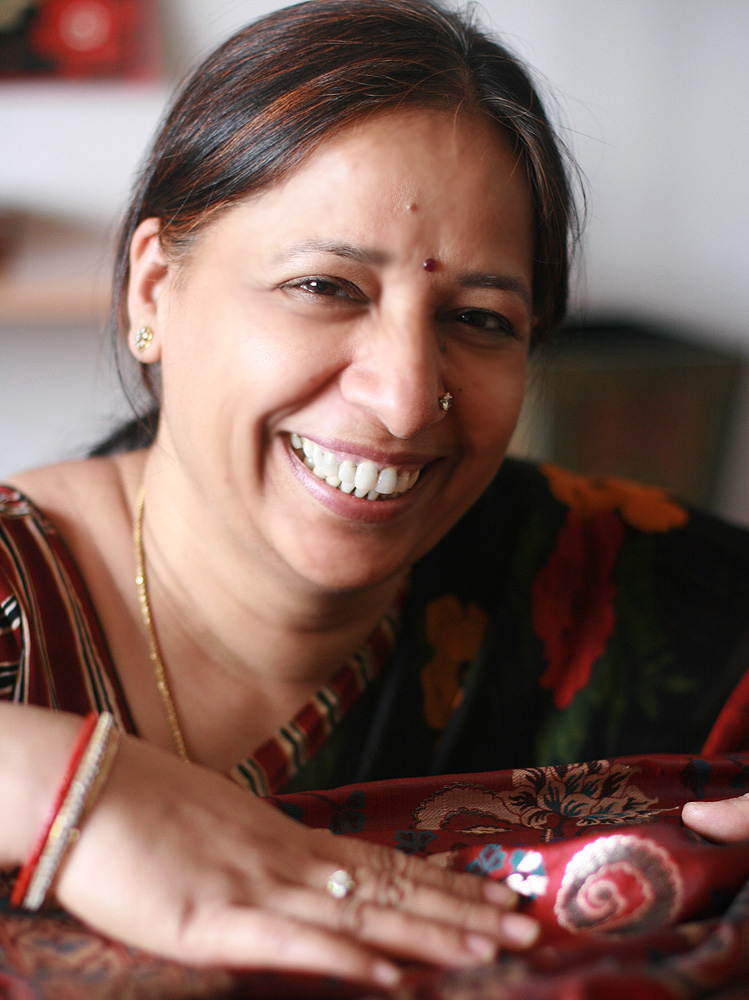 "Hello, I'm Madhu from Varanasi City, famous for the Ganges River. It is known the world over as the holy city of the Hindus, and it is also considered as one of the oldest continuously inhabited cities of the world. It was originally known as Banaras, and hence the silk from here is called Banarasi.

"I have very fond memories of my childhood. Being a holy city, I remember growing up in Varanasi was really enchanting and we visited temples a lot.

"My association with creative work dates back to my younger years, as I was involved in painting, stitching and designing. However, my actual involvement with Banarasi silk began when I married my husband since his family was associated with real artisans and weavers. I slowly got in touch with them and started my own studio where I designed and wove beautiful pieces, of course with the help of weavers.

"Art is the most eclectic form of expression of ideas and beauty, and this is what attracts me the most to weaving. Through my work I am able to help generate work for more weavers, and for this I received recognition from the Rotary Association of Varanasi.

"The tradition of making Banarasi sarees in Varanasi is very ancient and it is linked to the history of India. Banarasi sarees are mentioned in the holy scriptures of the Rigveda (1700‚Äì1100 BC), as well as in the Ramayana and Mahabharata epics. Banarasi sarees were woven of cotton and gained prominence during the Mughal era, when Persian motifs were fused with Indian designs to create the distinct flowery patterns, and silk was used instead of cotton. Back then they were woven with threads of real gold and silver, and adorned with precious gems.

"This weaving tradition is still being passed down from one generation to another, and it continues to flourish. Normally three people are required to weave one saree, and it can take 15 days to six months to complete depending upon the intricacy of the design. If the designs are too elaborate, weavers can even take a year's time to finish a single saree." "