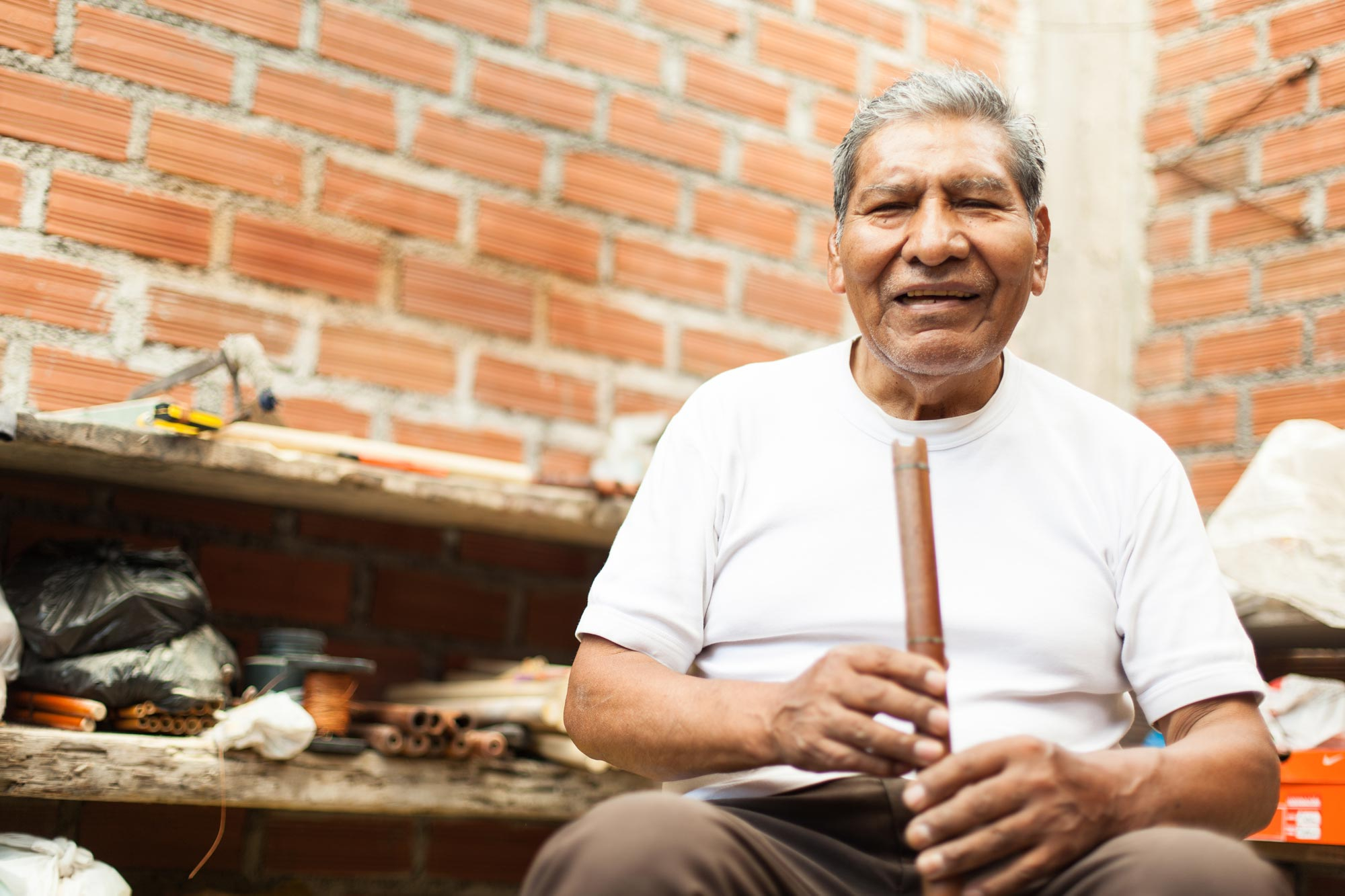 Benito Tito, known to his friends as Tito, was born in 1945 in the Huancane province of Peru's Sierra Sur.

He is an expert at crafting traditional Peruvian musical instruments. This is a family legacy, inherited from his grandparents and relatives. Curiously, Benito never used this knowledge and innate talent as a young man. He spent his time at other jobs because times were tough and he needed an income.

The artisan lived in his hometown until the age of 14. Life was tranquil but things got complicated when the country went through a very difficult time politically and financially. Benito had to go to the capital to seek better opportunities because he had to support his family, and earning money for day-to-day expenses was crucial.

He worked at a variety of jobs until the young man had the opportunity to work in a government job, which he held for almost 30 years.

However, when a number of employees were laid off, Benito decided to return to his traditions and roots. He decided to take advantage of his knowledge and began to develop wind instruments, mainly of reeds.

He set up a small workshop and began crafting instruments with the help of relatives back home who sent him the materials he needed.

At first, he found it very hard to sell his work. He had to knock on the doors of many shops to show his instruments but eventually, he began to be known. Sales increased when he added beautiful cases for his instruments, utilizing the colorful weavings that are typical in the Peruvian Andes.

With time, his talent became evident. Even the Minister of Culture invited him to participate in craft fairs over the years, which gave him a greater presence in his field.

The artist uses a variety of natural materials to make the different instruments, including bamboo reeds, Castilian cane and goatskin. Every instrument he makes is handcrafted with rustic tools. Among the instruments he creates are the zampo√±a and quena flutes, the charango guitar, the antara, roncadora, tamasca tambourines, taymuro, and cane ocarinas.

"I felt an immediate connection as soon as I heard of you," he says. "Your support was constant and, despite my age, I continue working with the help of my sons who are deeply involved in the workshop. They make it possible to continue with this family tradition."

"You let my work be seen and known outside of Peru. This is a wonderful opportunity."

Tito is very keen to preserve Peru's musical traditions. One of his goals is to equip his workshop with better tools so he can make more instruments to sell. This will assure a family income.

"Aiding in the preservation of our musical heritage is my family's legacy. We have carefully crafted traditional instruments for generations. My greatest goal is to best provide for my family, and to send my five children to college," the artist notes.

"My family is my most important source of motivation. I want to give them the best example possible. Now I want to show my little grandchildren that, with hard work and love for what we do, we can go as far as we believe we can."

Benito acquired a mastery of his art over the years and plans to share his knowledge with his descendents and with anyone who wants to learn."