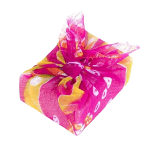 Della is a socially responsible fashion line based in Hohoe, Ghana, whose employees receive a steady, fair income as well as educational opportunities. Years before Della opened a shop of its own and began hiring its first employees in 2011, Mama Christie was working under a seamstress madame in Hohoe for little to no pay. Much of what she worked on was in fact outsourced orders from Della.

One day when picking up an order, Della’s founder, Tina, met Mama Christie and learned of her predicament. Tina decided then and there that she had to open a shop of her own. As soon as she did, Mama Christie gladly left her madame and became one of Della’s very first employees.